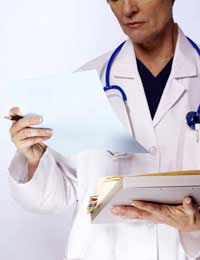 When studies first linked Hormone Replacement Therapy (HRT) with an increased cancer risk, there was a great deal of fear, panic and controversy around this treatment for menopause symptoms and women's health. After the initial rush of excitement that HRT could actually help with menopause symptoms, women were now worrying that HRT was completely dangerous, would inevitably lead to cancer and had no promise of providing any relief for their menopause symptoms.

However, it's important not to get lost in the exaggerated claims of the media and instead, to look at the facts about HRT. There are indeed risks but these risks do not outweigh the benefits for every woman. Choosing HRT is a uniquely individual task that can be properly done when you speak to your doctor about HRT and women's health.

HRT is a hormone treatment that affects a woman's natural hormones. It works to restore oestrogen and progesterone levels, which can relieve some of the symptoms of menopause. There are different kinds of HRT, which may involve a combination of oestrogen and the synthetic form of progesterone or only oestrogen.

The Link Between HRT and Cancer

Studies have suggested that depending on the type of HRT you receive, your risk of certain cancers can be elevated. While all forms of HRT appear to raise the risk of breast cancer, combined HRT seems to do so more significantly than the other types of HRT. The risk is also higher after ten or more years of use, which means that short-term use could be more appropriate for some women.

There are estimates by researchers of how many breast cancer cases in the United Kingdom (UK) have been caused by HRT but these kinds of estimates are difficult to make and not usually very accurate. There are figures that run up to twenty thousand cases over the last ten years, although researchers believe that three quarters of these would have been caused by combined HRT. Other kinds of HRT are linked to ovarian cancer or cancer of the womb.

Another concern about HRT is that it can result in abnormal results when a woman goes for breast screening tests. However, the cancer risks are also part of the bigger picture, which includes benefits from HRT. Benefits include a reduced risk of osteoporosis and subsequently, a reduced risk of hip fractures. HRT is also linked to a reduced risk of bowel cancer.

Deciding if HRT is a Good Choice for you

Making the decision to take HRT is not an easy one. Not only that, but it is a decision you should not make without careful consideration of the facts and a thorough discussion with your doctor about the benefits and risks of HRT for you. HRT is generally considered an effective, short-term way to handle menopause symptoms. As a basic rule, the longer you stay on HRT, the greater your risks of cancer and other effects of the therapy. When you stop HRT, your risks will eventually go back down as well.

When deciding if HRT is right for you, it will be important to look at your current risk factors. Women who have a high incidence of breast cancer may ultimately decide that HRT is not the right option. However, other women who don't have risk factors for cancer but do have a high risk of osteoporosis may find that the bone benefits of HRT are important for them, and thus warrant a course of HRT. Whatever you decide, your doctor can help you weigh your risks for HRT and cancer, which means you can make a safer and more informed decision about menopause and your health.