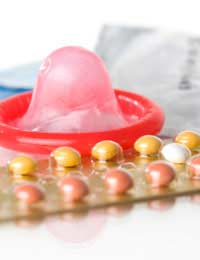 Contraception is an often forgotten issue when it comes to articles and information about menopause. In fact, there is a mistaken belief that once the symptoms of menopause commence, a woman is no longer fertile. However, this is certainly not the truth!

While fertility does decline as a woman ages, it does not mean that she can't still become pregnant. Actually, this is a time when women should be particularly careful about contraception because for most women, they are well beyond family planning and would consider a pregnancy at this time to be quite distressing.

Although you can still choose to become pregnant if you have begun the menopausal transition, you should still keep in mind that your body's health and resilience are not the same as they were in your twenties, thirties and even earlier forties. Older women have a greater chance of suffering from pregnancy-related complications such as gestational diabetes and there are higher risks of foetal problems such as Down's Syndrome.

It isn't to say you shouldn't choose to become pregnant if you truly want to have a child during this time but you will need to make the decision only after careful consideration of all the risks and concerns. Also keep in mind it may be very difficult, due to your low fertility.

For the vast majority of women, pregnancy will not be desired now and all women who want to avoid a pregnancy need to think about the best kind of contraception for their needs.

If you have previously been using an effective type of contraception, you may not wish to make any changes. Other women may find that hormonal types of birth control are no longer agreeable in terms of side effects and risks.

Although it is not commonly used in comparison with other types of birth control, older women are more likely to use the cervical cap, which offers a certain degree of control for women. It is not as effective as other types of birth control and requires some practice to insert and remove correctly, but can be a good option for older women who are more likely to use it each time they have sex as well as using it correctly.

Older women are at a higher risk of cardiovascular disease, which can mean that the pill is no longer a preferred method of birth control. However, the risk is much greater for women who smoke and have hypertension, so it should be reviewed on a case-by-case basis.

In fact, there are some benefits from the pill for older women as well, such as more regular and lighter menstrual bleeding and possibly improved bone health.

Generally, it is usually advised that a woman continue using her chosen method of contraception for a minimum of two years after her last menstrual period if she is under fifty years of age. For those over fifty years of age the recommendation is generally one year. While the chances of pregnancy are extremely low during this time, a woman should still be careful if she wants to avoid a pregnancy.